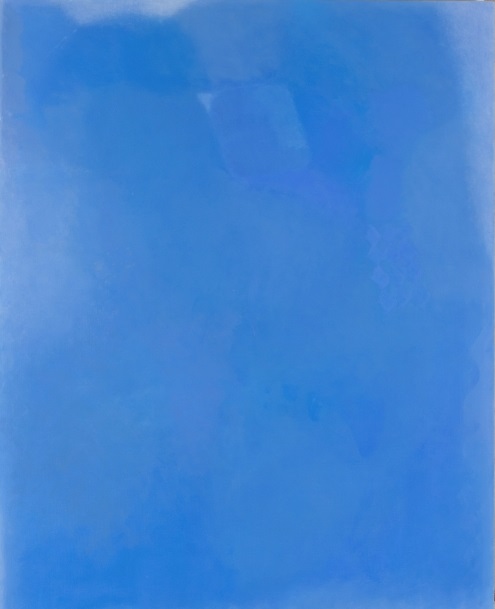 This time the painter presents a collection of samples from her different series, reflecting different facets of her creative work. The author remains devoted to subtly nuanced monochromic abstractions, yet presented in a variety of versions. Next to a blue canvas, which has become a sort of Rūta’s distinctive mark, there are whitish, dark, pink and even vermilion canvases. The plastic of nebulous space components is also different: sometimes it reveals into a wide horizon with abundance of indistinct motifs; sometimes it is a hint to the archetype shape of cross or a luring light silently unfolding in the dark. In all her paintings the author uses transparent, overlapping washes of oil paint, as if postulating that abstracted and generalised forms can bring us much closer to the essence of reality than replicated exterior of natural shapes.

The exhibition is on until 20 June.

Rūta Katiliūtė, just like Constantin Brâncuși, believes that the most abstract shape is at the same time the most realistic one. Reality is not an external shape of things, but rather their essence. It is not possible to convey anything essential by a mere imitation of external shapes. Similar views were also taken up by Piet Mondrian, who travelled from the motif of nature and its dissipation towards abstraction. Rūta’s choice is reduction: from realistic forms as a mere replication of externals towards something that is maximally simple, steady and non-prosaic. This path may lead to intangible nebulosity, mist and mirage – something that is hardly predictable. It is not decorative. It is not something symbolic, either.

Like in minimalism, Rūta’s paintings display reduced images, free of any visually complicated gestures. Like in minimalistic[V1] works, she bravely challenges boredom, monotony and repetitiveness. That’s why she paints unicoloured sections with repeating monochrome patterns and the main code. Yet, there are no pure analogies; rather the entire kaleidoscope of nuances. One of the reasons why Rūta’s paintings fall outside classical minimalism is the blurredness of physical shapes: she uses several thin washes that overlap and invisualise one another.

Her series differ from each other in the chosen dominant colouring. This exposition displays their section: we can see individual samples from series which in their entirety reflect various sides of Rūta’s creative work. All epitomes are true and authentic, although one of them is truer than others: it’s blue, of course. The explanation for this is definitely not that blue is the most melancholic. Nebula is not melancholic: like reality, it has simply absorbed in itself emotions, impressions, feelings, details, and perspectives. Sometimes, there is a light emerging in it; sometimes it is a cluster of different tones as if the scents of forms. And sometimes, the spaces of nebulosity produce the signs of planes, bonding with two-dimensional canvas and implying themselves rather than some hidden meanings. Here we can hardly find some unclear formulas or secrets.

That’s why I call Rūta’s abstractions visualising. However, the content of the picture can only be discovered by those who are observant, trusting the truth of their feelings and open to a broad variety of the meanings of reality.