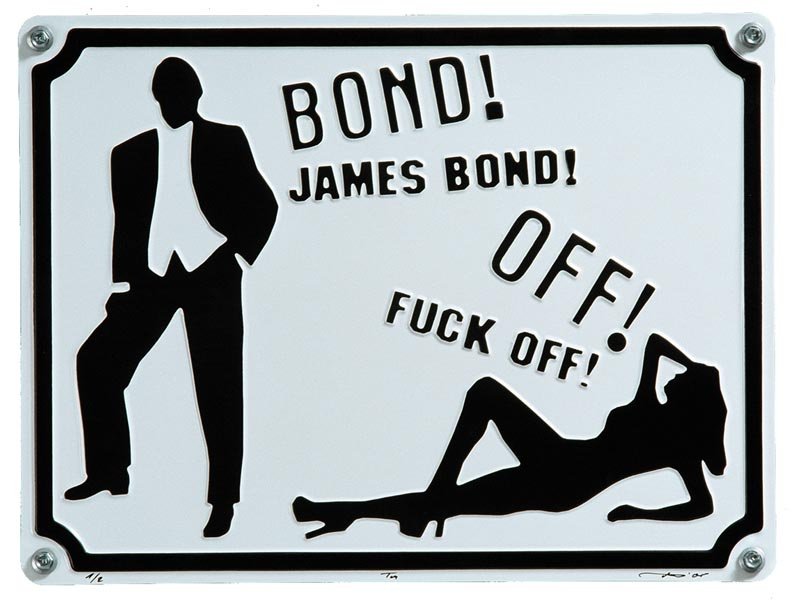 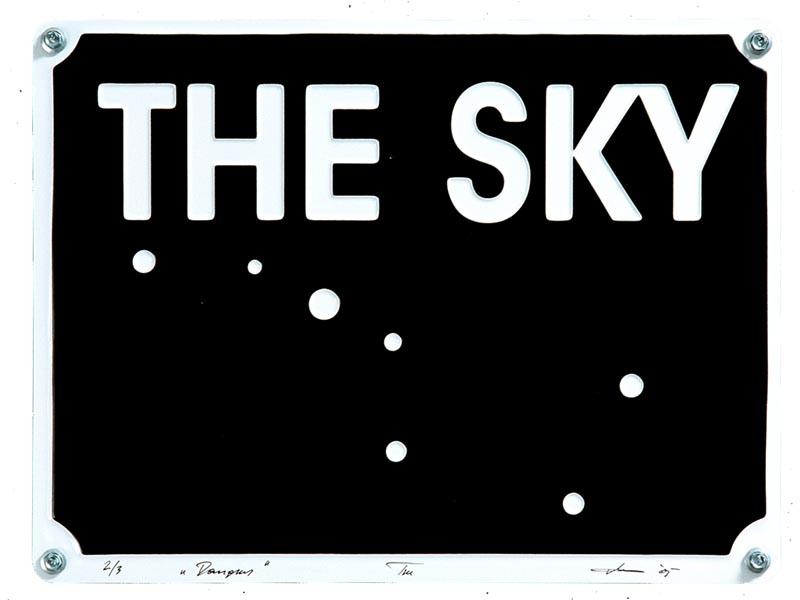 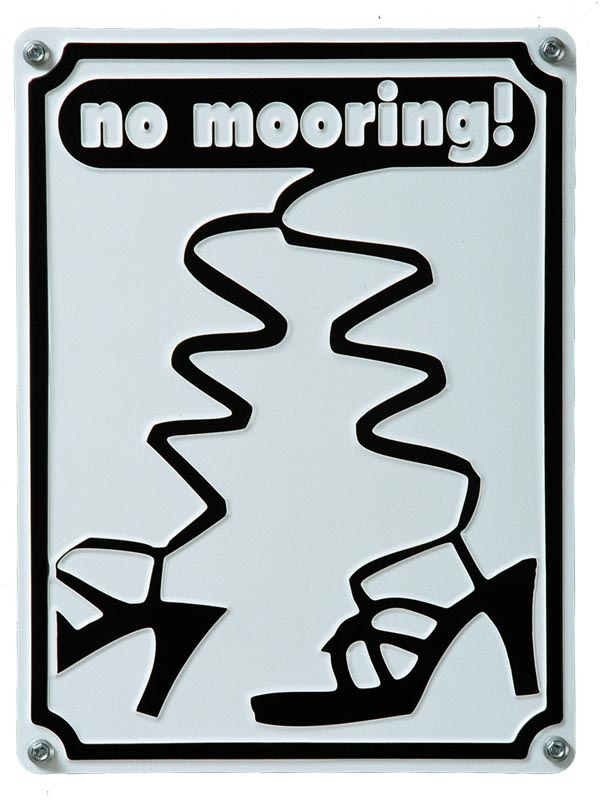 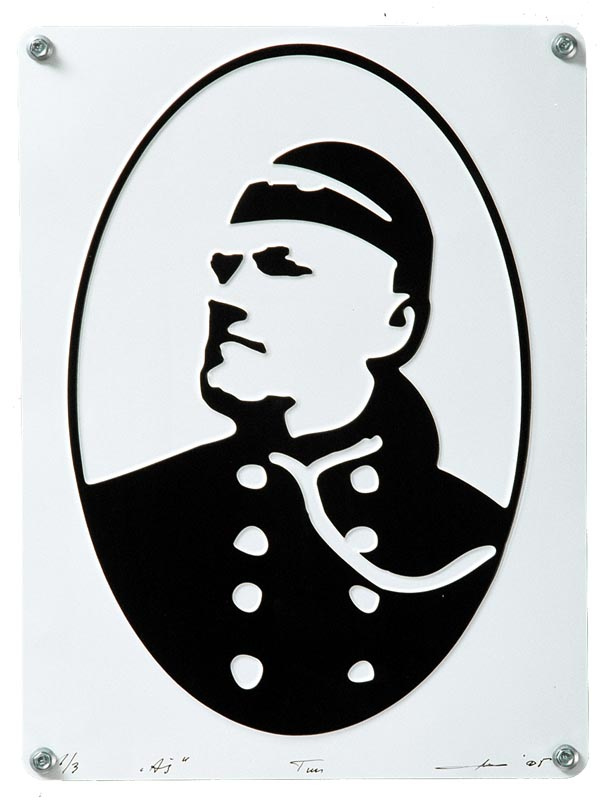 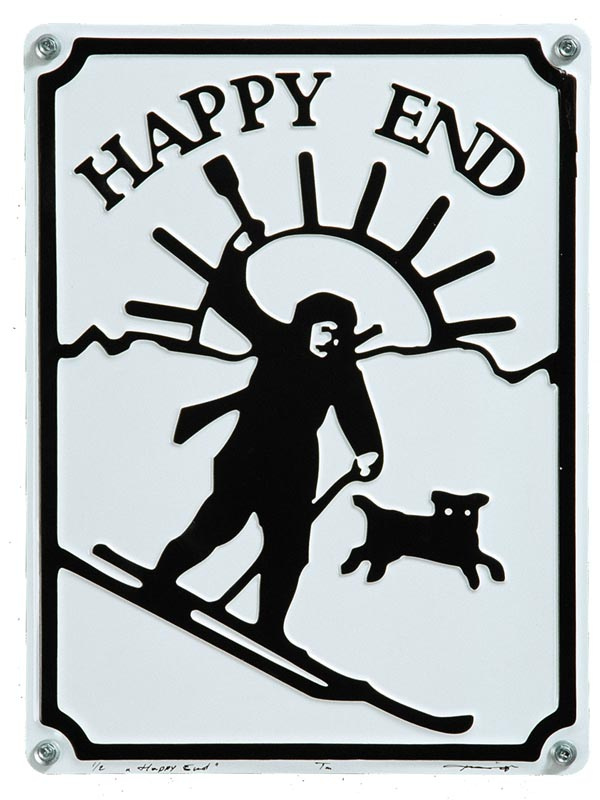 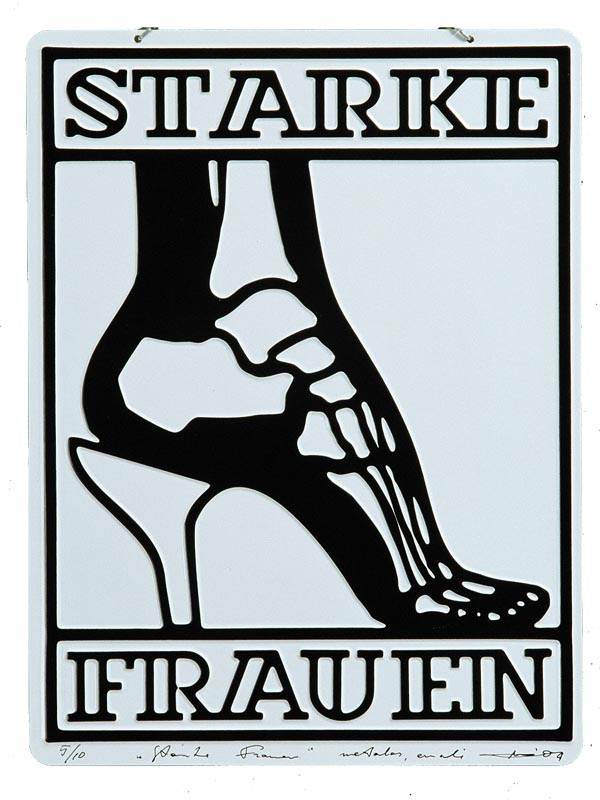 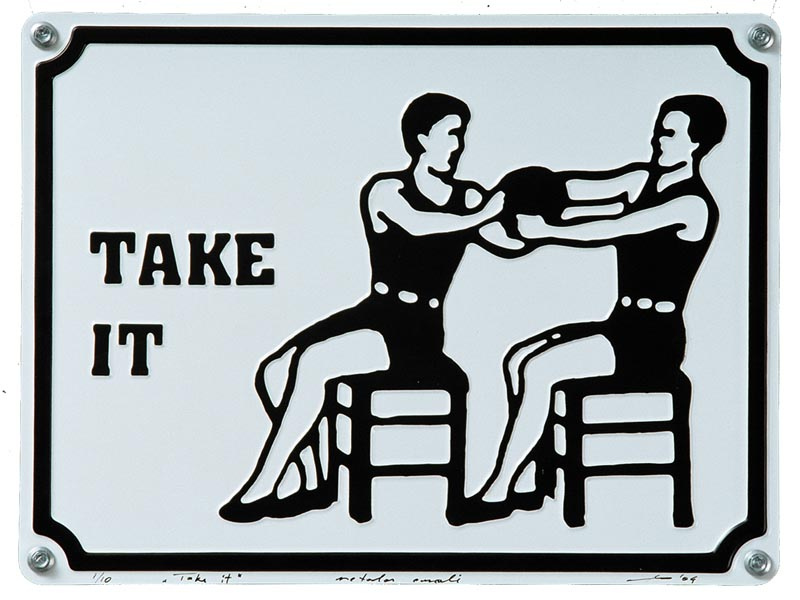 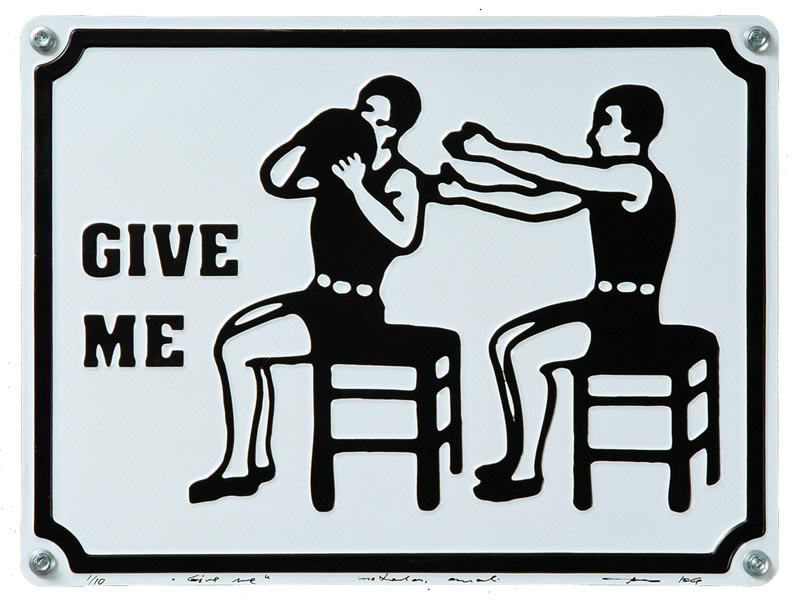 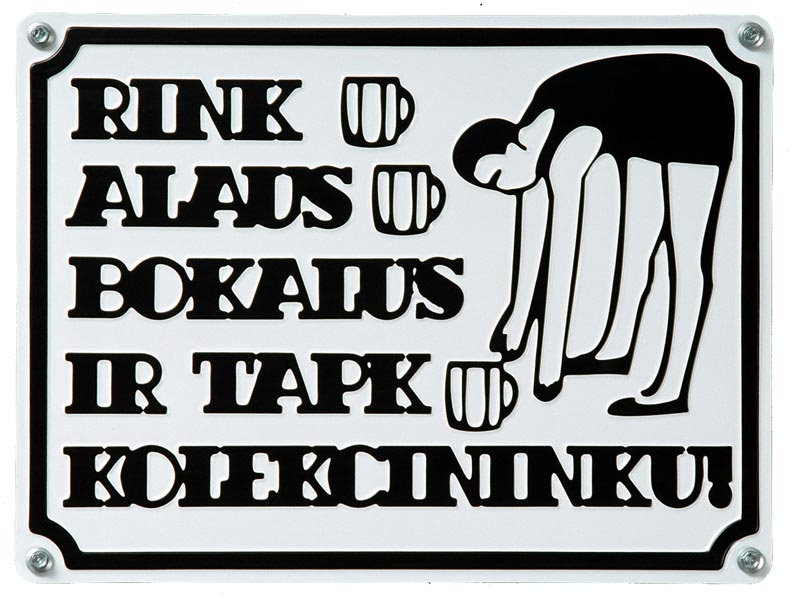 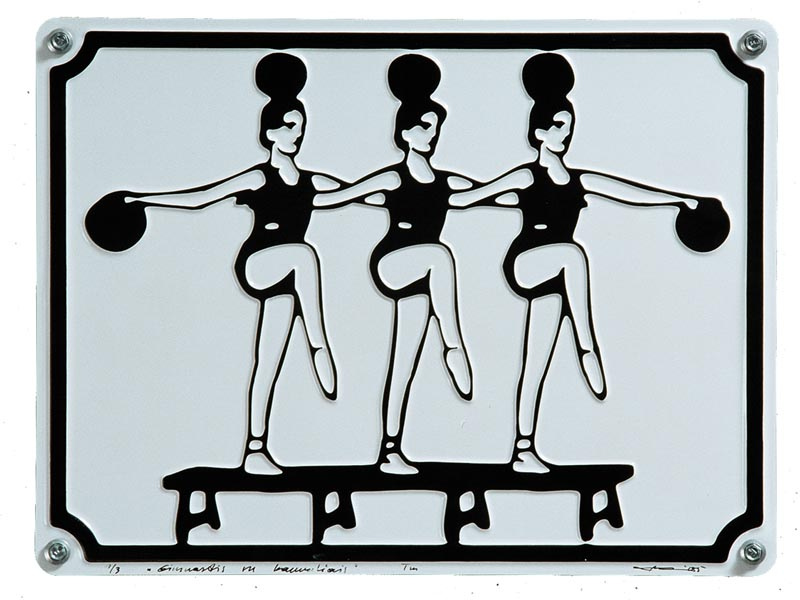 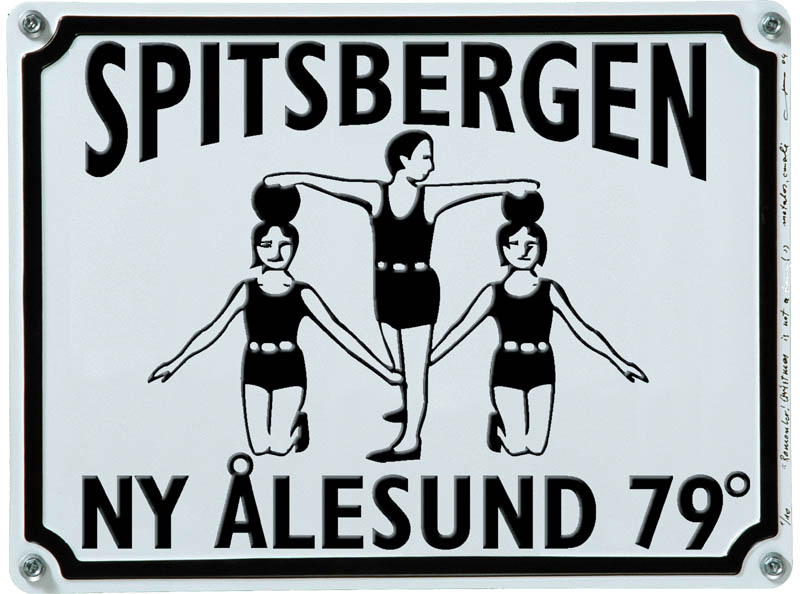 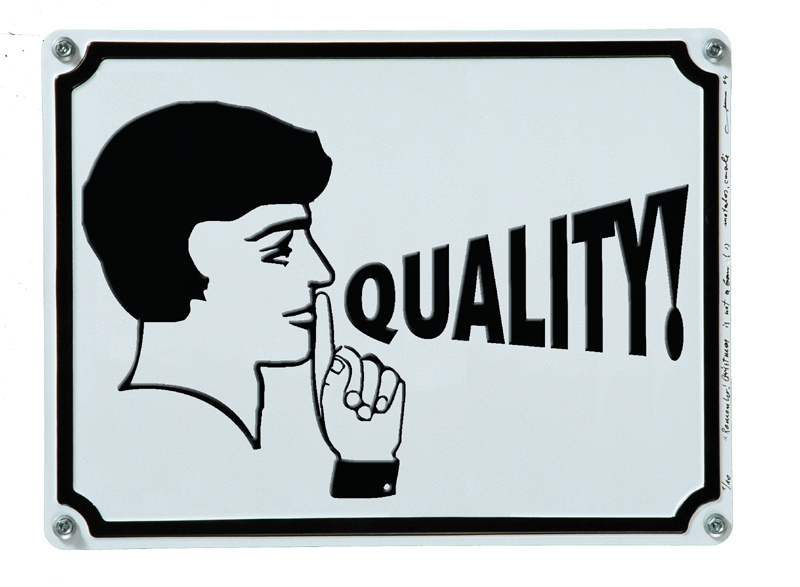 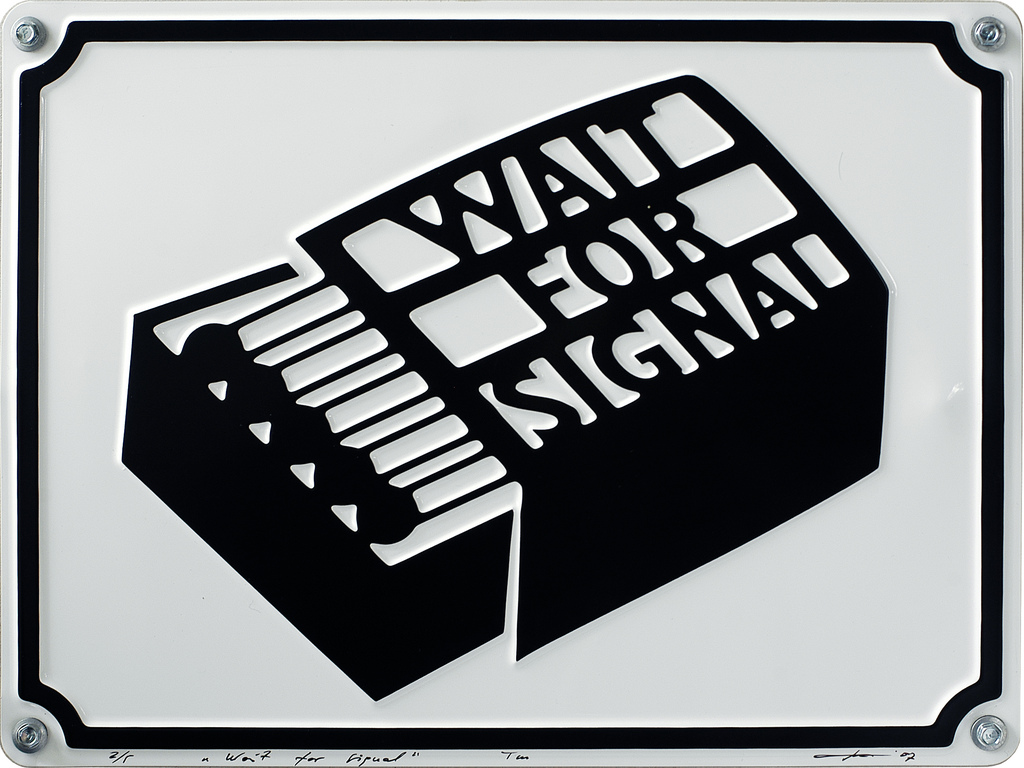 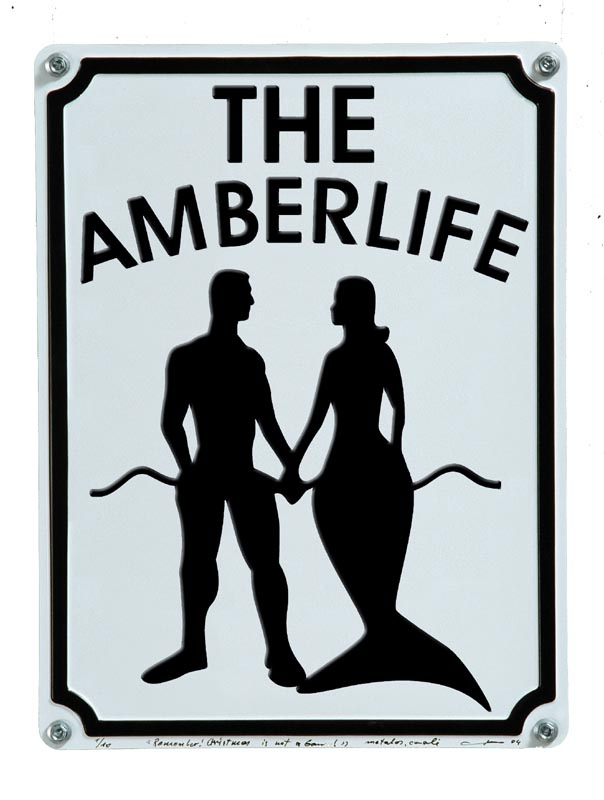 For many of us curtain periods in our lives – or career seems to stand alone being detached from what was before or after. These periods – or moments does not necessarily be good or bad and may not even have been thoroughly planned they just happen as a sudden inspiration when a change is needed. When an artist is doing something new and different in his career others – meaning critics or art historians will try to grasp the development through earlier works leading to the new style.

What went through Naglis Baltušnikas’ mind the day he moved on to a new path in his artistic life? Here was definitely a new expression. Not just was the style new but also the very technique; metal relief printing. But maybe the biggest difference was the consept. Up to this stage there had been what we may call art in it’s pure form. Here we face signs – probably encouraged by the process itself and by it’s normal use – as for car-registration plates. Why this is so different is easily explained. Signs are to be informative, instructive and often demanding. The first work in this new category was “Starke Frauen”. If seen alone it indicates that this is the place for a certain type of females. It shows a shoe-heel upon which is a foot showing the bone-structure. If shown in a public health office or in a doctors waiting room it could be taken as a warning, in a working place or in a school with majority of women it could be a sign for pride or demand.

The five-piece work “a, b, c, d, e” shows a female climbing – not a ladder, but something that looks more horizontal bars for athletic exercises. The letters hoever makes it more musical (as it is almost impossible to look at the pictures and read out the letters without making it sound almost like a song) or it can be almost sexual – the hard lines as background for the soft female silhouette.

As sex is mentioned it could be amusing to remember about another work the two piece set of “Give me. Take it” In one catalogue it was wrongly put down as “Give Me – Take Me”. But perhaps that tells more about what goes on in peoples mind than in artistic ideas.

This work however was also executed in cross-stitch embroidery and framed with glass and thick golden frames for the “TEXTILE 07” Biennale were it received a diploma.
The work shows two athletic young men sitting (!) whereas one gives a ball to the other in a kind of uncomfortable position. As it is a two piece work it adds to the instructiveness “Please follow as indicated”.

As easily shown the works contains a lot of humor and part of what makes them strikingly modern is that the motives shows figures, letters and symbols you feel that you have seen before. But here they come in a new setting and in a context that would almost be an insult to former days laws and morals. The sweet work “Laba diena” shows a girl and a boy in a style that reminds of school-crossing traffic signs. The letters builds up on the Sunday-School morals and when this work – as most of them is fixed to the wall with screws that seems fit for shipbuilding than for a picture-Gallery it also tells you that the morals in this work are indisputable and eternal facts. Not all art can boast of that.

Among the early works was also the first self-portrait. If one gets the feeling of something historic about it one is not far wrong. The oval form and the hints of an old uniform and the attitude in the portrait itself indicates the great explorers or the military leaders of times long gone by. The idea itself comes from a series of imposing (of course male) portraits in Sir Henry Morton Stanly’s work about the inner parts of Africa. Why to seek the inspiration from these pictures? Again because these pictures were not meant as art, they were important information in a society with strict hierarchy and social classes. This pictures should also work as pure embellishment for the books. In other words they are signs and ornaments and as such suitable for the basic ideas in Baltušnikas’ works.

Does all this suggests that the works belongs more in the decorative sphere and not – to put it like that – in the proper art world? Far from it. First of all because you can lift whatever out of everyday life and make it art – on the condition that your idea to do so is strong enough to support the work itself. Secondly it should convey the artist messages to his viewers.

With these works one has a lot of things to support the above mentioned “necessities”. The line drawing itself  should surely be sufficient, the technique (here one should take to consideration the obvious limitations within the technical possibilities) used but for the first time in the arts. But there is also another thing; the guided tour to the land of absurdities, supplied with precise informations on what to do and how to behave.

If to look for other elements of fascinations or inspirations for Baltušnikas to do his work one shouldn’t talk to him long before something about the island of Spitzbergen comes up. For many of us this is indeed a land of absurdities but after different stays there this North Island has eve been allowed to penetrate into his artwork like one of his Self-portraits and in the work “Remember! Christmas is not a game!”. Here is an Icebear of enormous proportions fighting with a man holding a gun. As so often the problem is put forward but the result remains unanswered. In this category one could also mention “The Trap”. Here, with the help of a bucket of water, a bait and a plank of wood on the table the poor mouse is to be lurked into something that he will not see the consequences of. But will it work? Maybe it is better for all of us (the mouse included) that these stories are not told full.

We don’t know – and maybe he doesn’t know himself – for how long this series of works will go on before he takes a leap in another direction. But he has managed through these works to make a lot of us very happy indeed. Humor is not a usual thing in modern art where so much of the works – especially in photo and video but also in performance is concentrated around the failures of  modern urban life with it’s loneliness and despair, brutality and poverty. Not that this is not necessary but the thing is that you can not recognize the one without the other. It is the diversity that sets the standard – if everything was bad you wouldn’t know what was good.

Yet Baltušnikas’ works are not pushy. Rather – for these days – small sized and in black and white. Apart from the above mentioned works in textile they are without frames or any museum peculiarities. They can easily be mounted outside – which indeed they have been.

Yet there is this thing about quality – which in this case seems obvious. As I doubt I would grant his permission to talk about it I can refer to his own work “Quality!” showing a lady hushing the word Quality – with an exclamation note.

At last I should mention that there are quite a number of works showing various activities related to sport but maybe not – as you look closer – attainable due to normal laws of gravitation but who asks for details in the land of absurdities? Here again the directions seems clear and detailed enough but I – like the mouse – will not be tempted to try.

But you will follow the signs, will you not?
Sorry.