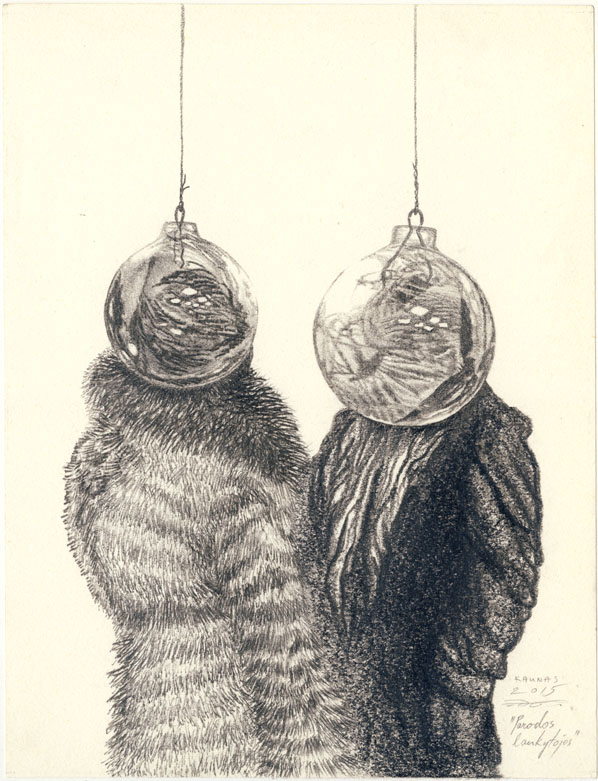 Greta Grendaitė / Tomas Vosylius “Mismatches: or When Everyone Knows Best”

Greta Grendaitė’s and Tomas Vosylius’ creative duo “Legal (Art) Lovers” is fairly unexpected. Creating with different tools and materials that essentially propagate connotations characteristic solely to them, they eventually subtly thematically converge into a cohesive organism. In their collaborative exhibitions the artists create a core dialogue, in which they speak about their socio-cultural, urbanised surroundings and, of course, about (sometimes only intuited) person in it, who like a chameleon changes shape according to the roles produced by contemporary society itself. This we could see in their project “Persirengimas” (“Disguise”) exhibited in the gallery “Meno parkas” in 2013. In the sequel of the above mentioned project – “Mismatches: or When Everyone Knows Best” – G. Grendaitė and T. Vosylius creatively analyse man’s states of being and emotion, which reveal themselves in the collision of culture and nature, the artists contemplate inter-experience, the experience of intermediate, hardly definable situations, the states in-between.

“I felt that from the moment I woke. And yet, when I started functioning a little more smartly, I misgave.” [1]
“It is not true that the desert forces us to contemplate threatening sunsets.” [2]

Greta Grendaitė / Tomas Vosylius
Mismatches: or When Everyone Knows Best
There is no shadow without an object. However an intuition about the appearance of a shadow can arise not yet knowing, not yet sensing the forthcoming object.
**
A thought can refuse or reconcile itself with a feeling; (non) adaptation (of the self). But does an object with a shadow have this choice? Yes. In (re)collections. This one is relative, even (adjust)able. Shadows sometimes utilise this, as do objects. And so they cover themselves with each other, they can step on each other’s heels, interfere with watching each other, admiring, making love, hating, ignoring, fooling the prisoners of Plato’s cave… How does this succeed? Flora and fauna are prone to adaptation.
**
After all, there is no feeling of guilt in nature (someone said). The (re)collection of an object is able to change. Forgets the shadow or otherwise doubles it.
**
We invite you to these open seminars: “An Easier Way to Sell More”, “Let’s Create Our Own Jobs”, “Back to Nature”, “Befriend Your Own Shadow” and others.
**
– Don’t ask.
– Don’t think about death.
– Don’t think about life (all the same, it always ends in death).
– Don’t raise existential questions to yourself and to others.
– Don’t raise any questions, especially “why don’t we try?..”.
– Don’t mention words such as “meaning”, “essence”, … . Do not disturb.
– Only “here and now”! I am already enlightened, listen to ME, don’t interrupt, because I KNOW. Don’t criticise.
– Erase the rubbish of memory. Trust. No stories nor witnesses. No publicity.
– Disappear in the grass, in you workplace, in borsch, go to yoga, coo gently and don’t forget your camouflage smile (there will be nothing that cannot succeed).
– Draw flowers (decorative manner advised).
– Buy self-pollinating plants, you’ll get two in one.
– If you really love and respect me (and do you respect me?), say “YES”.
– .…
– Silence means consent. We congratulate you having overcome yourself! You are a shadow. A shadow of a shadow. Do you have any questions, maybe?
– …
*The exhibition is comprised of drawings, objects of sculpture and jewellery. The project is partly sponsored by the Lithuanian Council for Culture.
[1] John Wyndham “The Day of the Triffids”, p. 10. Penguin: United Kingdom, 2001.
[2] Gilles Lipovetsky “Tuštumos era. Esė apie šiuolaikinį individualizmą”, p. 42 (“L’ère du vide” // “The Era of Emptiness: Essays on Contemporary Individualism”). Vilnius: Mintis, 2013.
Translated from Lithuanian by Iveta Jaugaitė