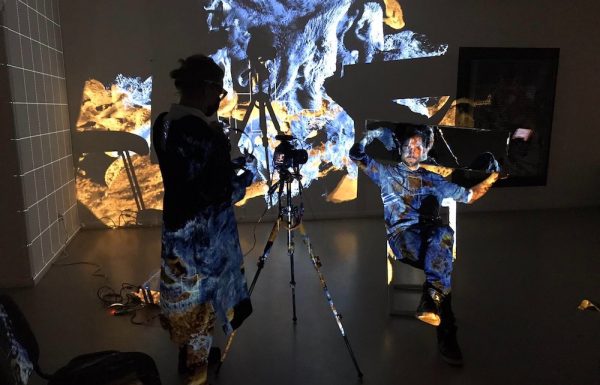 At the invitation of the gallery Meno Niša, renowned photographer and video artist Audra Vau visited the studios of gallery’s artists and created their video portraits, Artists About Artists, which reflect the artists’ limited present, creative ideas, and the very process of creating works of art.

Audra Vau loves to create portraits of artists, and they became especially meaningful and relevant during the quarantine when artists stayed inside their studios and were unable to present their works live to the public. And while the numbers of video reports about artists and stories from their studios have increased recently, the ones by Audra Vau stand out in their format and creative idea.

According to Sonata Baliuckaitė, curator of the gallery Meno Niša, the video series Artists About Artists is an artwork in itself, as Audra Vau looks at artists informally, leaving room for interpretations of the audience. The artist agreed by saying that when creating the series, she avoided formality because a work done formally is just a copy of something done with passion, feeling, or talent.

During the interview, Audra Vau spoke in more detail about her work, the emergence of the series of artists’ video portraits, and her plans for the future.

Audra, which one of your projects was the most memorable, most important to you as an artist?

The most memorable for me was my first participation and my first exhibition in the group international exhibition Innocent Life in 2000 at the Center for Contemporary Art. There I presented my project, which also became the face of the exhibition. In the project, I showed the topic that was discussed for the first time in Lithuania – the influence of the beauty industry on a new growing generation. I photographed a performance in which a 13-year-old girl did beauty treatments (masks, massages) for another, 11-year-old girl.

Of course, subsequent exhibitions, especially the success in the group exhibition Edge of Chaos (Expelled from Paradise) at the 2015 Venice Biennale, where my project was the main one and which combined the works of other artists, had a big impact on my self-awareness. I am glad that the international art and culture news portal Blouin Artinfo has included the project in the twelve events to be visited during the Venice Biennale. Indeed, all these presentations of works are very important to me and change me.

Going back to the genre of artists’ portraits, everyone probably remembers the portrait of Jonas Mekas presented at ArtVilnius’18, the video installation Poets Never Sleep, in which you filmed J. Mekas, and he filmed you. Tell us about this collaboration, what portrait of the artist did you convey in this project?

As for Jonas Mekas, despite the fact that I had met him many times, there was always the impression of a failed meeting. People of this caliber seem inaccessible, it is almost impossible to “hang out” with them, there is no possibility for personalism, coziness. Thus, the main idea of the video portrait was to give all viewers the opportunity to be face to face with a powerful artist, that is, even though many people watch this work at the same time, Jonas looks at each one personally. There are other interpretations, such as, no matter what happens around, Mekas is filming and filming, and filming…

How did the video portrait series Artists About Artists come about?

I would like to thank Sonata Baliuckaitė, the curator of the gallery Meno Niša, for the opportunity. Perhaps this series was offered to me because all my projects done so far were based on real people or events, like a depersonalized documentary in which a real person with their story turns into a broader theme, abstraction, or poetry.

How did you prepare for every meeting with the artists? Did you think out how you would portray the artist, or was it spontaneous?

I started by visiting artists, we talked, I filmed tests, recorded my feelings and thoughts. I knew I didn’t want a formal documentary. I avoid formality, a work done formally seems to me personally just a copy of something done with passion, feeling, or talent. I like the feeling of the “first time”. Before I took action, I knew I wanted to convey the feeling that the person, their voice, their energy, the environment would create. Artists are wonderful separate worlds…

How did the artists react to these videos?

Due to quarantine, the exhibition of your video works planned by Meno Niša has been postponed until April. Briefly tell us about the concept of the upcoming exhibition.

The title of the exhibition, Nowhere, is about the feeling when someone leaves and is nowhere to be seen. A time like the Soviet era, when I was born, that country no longer exists; a person leaves – and he is nowhere to be found; the world and the people as they were before the pandemic will never be the same again… In fact, I am not talking about negativity or loss, but about the poetry of feelings, sensations, as if in a state of weightlessness when you are only with yourself. As a person and as an artist, I am most attracted and excited by things that cannot be controlled, regulated by any system, norm, or rule – you cannot take away a person’s past, things that have already happened, cannot forbid love or memories. So, despite the desire of the system or society to control everything, there are such wonderful spaces against which any control is powerless. My project Out of control was presented at the Venice Biennale exhibition, where I also talked about control and the uncontrollable beauty of nature and human powers.

With the onset of the pandemic, more and more artists and projects have moved to the virtual space. How are you going through this period? What are your plans?

The last few years have shown how difficult it is to plan anything, the chaos around me has a good side – you can spend more time on yourself, reflecting, observing, or helping others. The main plan is not to give in to pressure, to carry goodness and positivity into the world. As I have repeatedly mentioned in my speeches or interviews, in the modern world, people are united not by territories but by values.