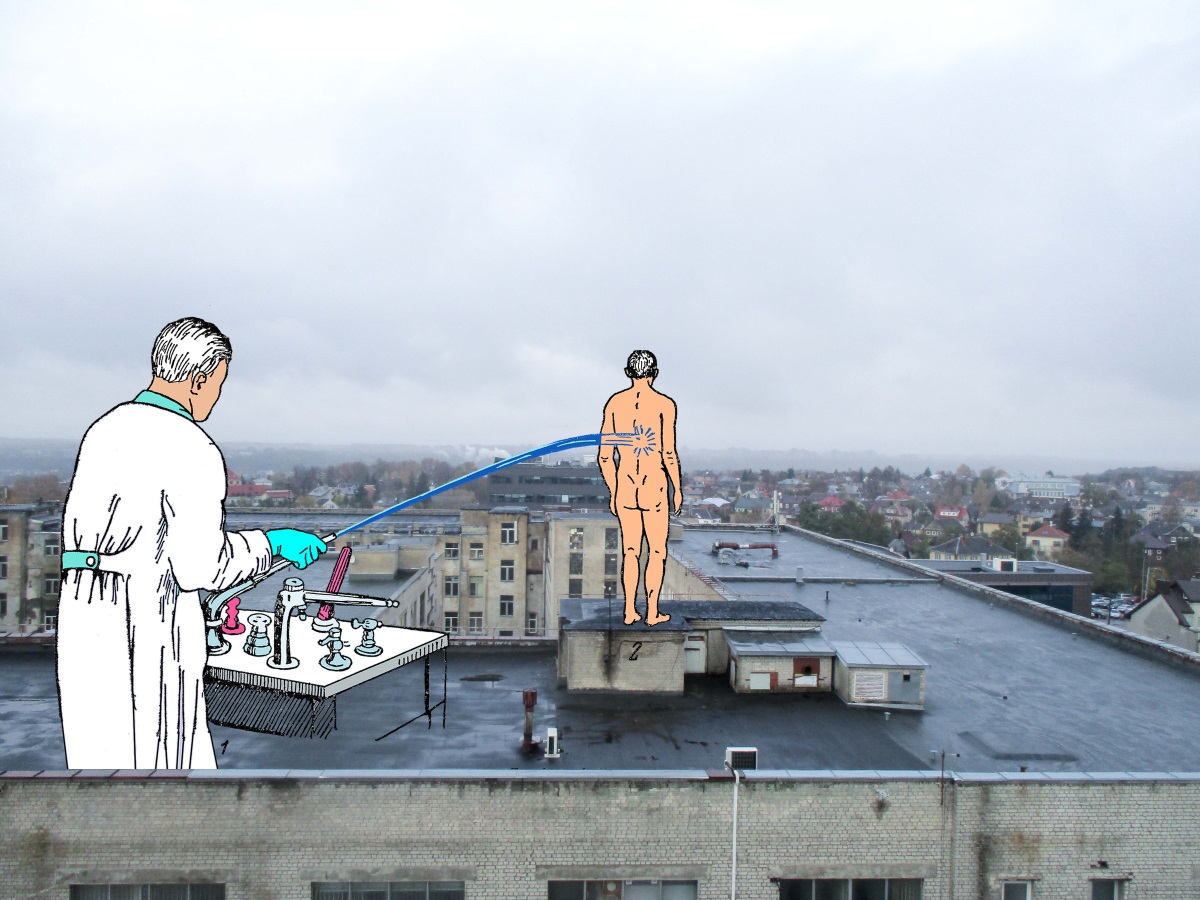 Gabrielė Gervickaitė joins photography and illustration in her investigative exhibition 03 that opens at 6 PM on March 28 at the gallery Meno Niša. The artist looks back at the Soviet period, in which she was born and came of age, as well as investigates the power structures of today and how these were shaped by Soviet imageries.

When Gervickaitė presented her show The Side Version of the Norm at Meno Niša in 2016, she built a blue ramp in order to remove obstacles for disabled people to experience the exhibition; this time, she uses the emergency speed dial “03” as her artistic call.

By juxtaposing illustrations from the period and images of today, Gervickaitė investigates ethics and the gaze of power, the norms that were and are being established. The artist uses illustrations from Soviet medical handbooks – surgery, gynaecology, physiotherapy – as her gateway into that period.

“What interests me is the aesthetics and ethics of human depiction in medical books. I cut and paste bodies into new settings, I transfer the viewer into a different world, into unusual and even unsettling situations. Through these works of art, I explore power mechanisms built by the medical industry and medicalisation in the Soviet period. Medicalisation means interpreting a person’s condition and problems as medical issues, i.e., making human being an object of the medical gaze, having medical authority penetrate into everyday life, also turning medicine into a form of social control,” Gervickaitė explains.

The title of the show, 03, refers to the speed dial number for emergency services; at the same time, it represents a sequence of elements in Gervickaitė’s works: the first element is illustration, the second element is the image, and the third element is the combination of the first two. As to her source of inspiration, the artist says that medicine has always been an interesting topic for her, her previous works were inspired by her own personal experience of undergoing surgical procedures.

“Since I had not studied Soviet medicine, I had only experienced it, I wanted to go where I hadn’t been before. It was very interesting flipping through medical handbooks written for would-be doctors. How complex and gruesome they are, and fascinating at the same time. Gruesome, since the images in them are not something a layperson would normally see, some are terrifying, a material for horror films. Fascinating, because they show man-made structures combined with the human body and so on,” says Gervickaitė.

Gabrielė Gervickaitė (born 1982) is a member of the Lithuanian Interdisciplinary Artists Union and a graduate of Vilnius Academy of Arts. She has participated in a number of shows in Lithuania and abroad and has curated social projects and exhibitions. 03 is part of Meno Niša’s project “Art Space for Young Artists”.

The project is partially funded by the Lithuanian Council for Culture; the gallery is supported by Vilnius Municipality.