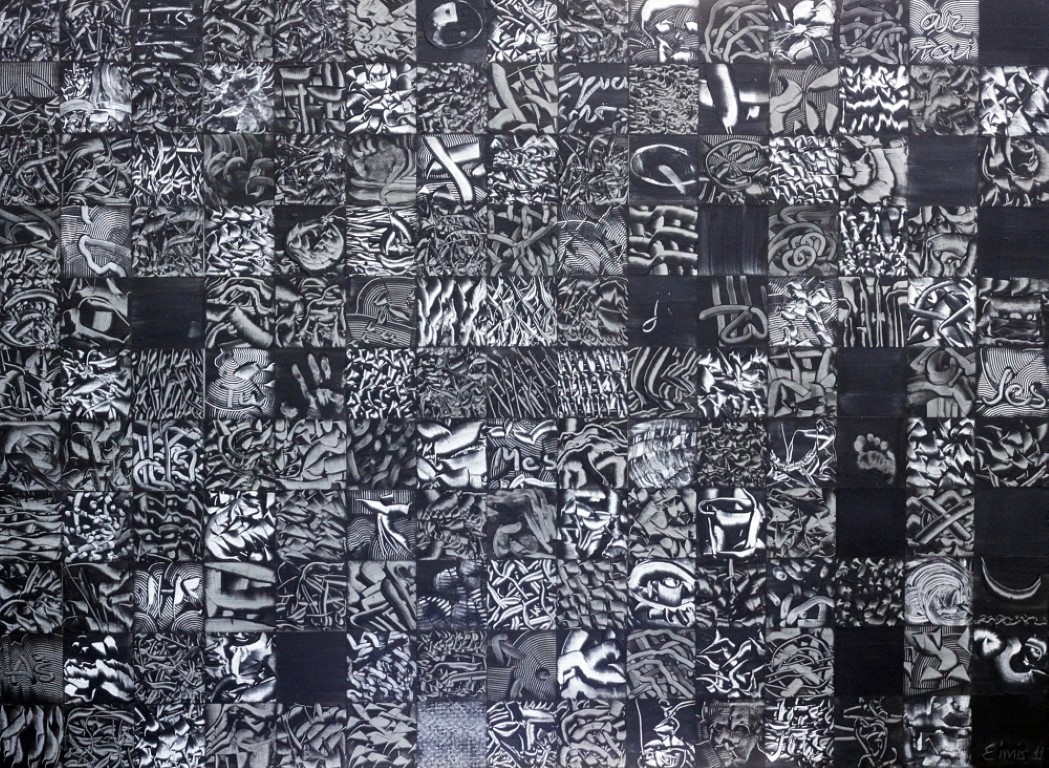 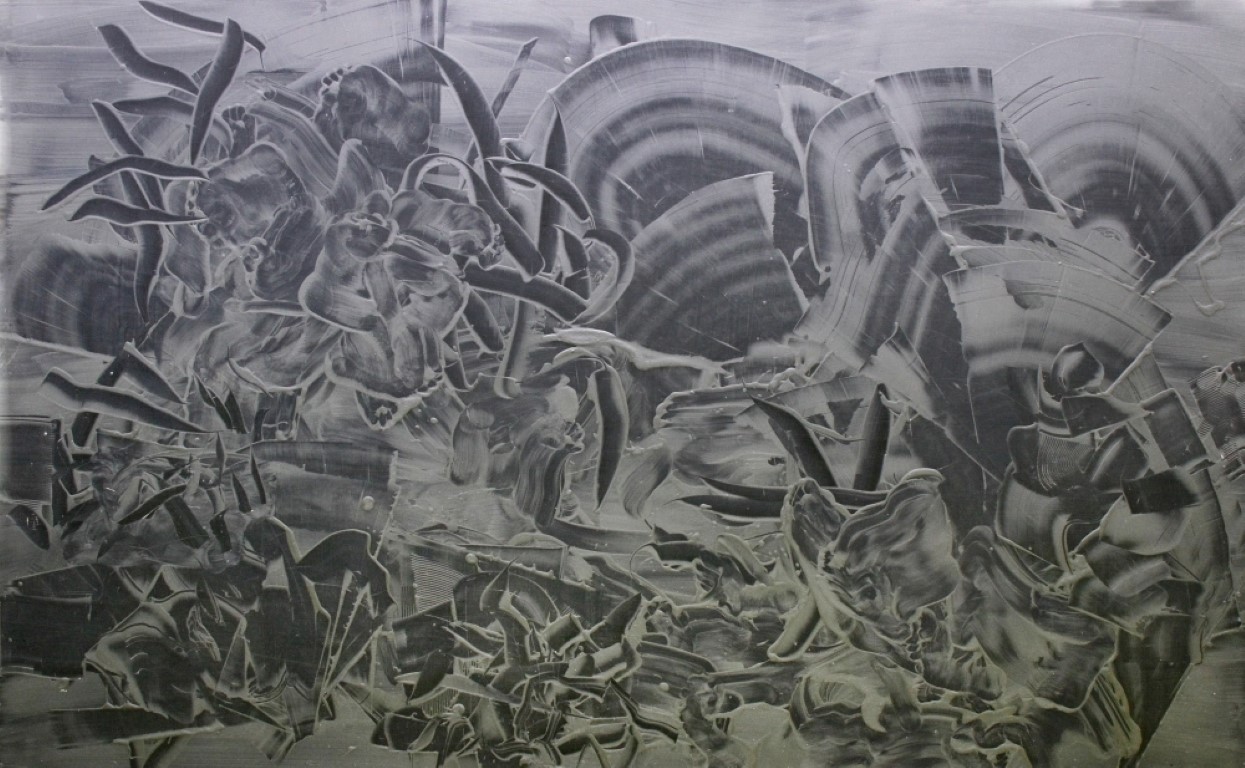 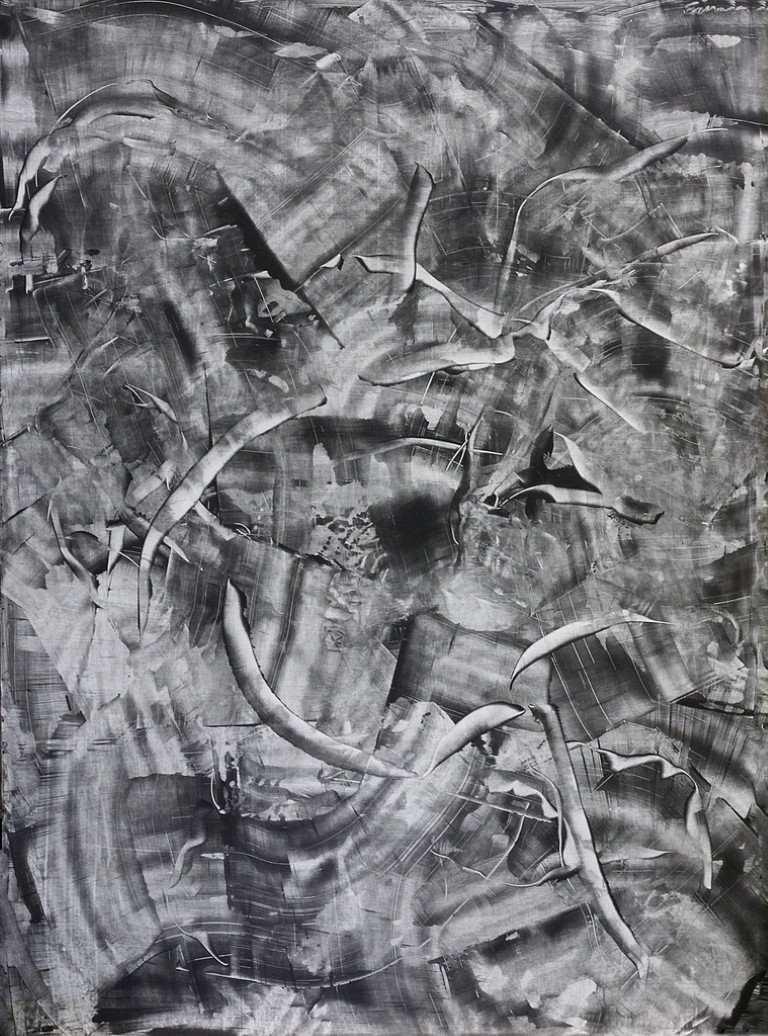 “A painting is a window to the world and to its vastness”. Even if we don’t like such a quotidian approach, the statement appears to be bandied about not without reason. A painting itself is a world, but it also functions as a window onto the world.

The mystique-concentrating plastics and disproportionate tandem of grey and blue developed in the exposition of Eimutis Markūnas create a fussily conservative profile of the exhibition. The limited demand for colours attaches attention to the searches for content. Thicket. Confusion. Complexity of environment or its fragments. By following the images and the title of the exhibition – “The Passage Way (Durchgang). Painting” – a perceiver (probably) mentally builds a map of odds.

The author shares the stand of the great German philosopher Martin Heidegger, who turned the understanding of an artwork upside down in the mid-20th century. The painter and the philosopher especially share one aspect – the metaphor of the corridor which lies in the exhibition title. An artist is understood as a phase of coming up of an artwork. An artist is a path for an Artwork to appear and a path towards the Perceiver.

The exhibitions can be divided into several groups of exhibits: graphite works (easy to recognise by the audience taking the pulse of contemporary art, as Markūnas has been using this author’s technique for several years), then blue monotipies “The Try” (Bandymas, 2000) and, finally, sketch duets “The Wandering” (Klaidžiojimas, 2000) produced using the hand painting technique.

The exhibition displays the latest graphite works by the author. What is important for the boards of quite an impressive scale is the crating of a space and the being in it. It is the transition from consciousness to sub-consciousness. The introduction of a casual, drearily grey object, such as a television (film) shot, into strongly abstracted graphite painting, like in “Unexpected Disturbances” (Nenumatyti trikdžiai, 2013), or in “January the 21st” (Sausio 21-oji, 2013), where horizontal tapes in the composition of never-stopping Cobalt blue again evidence cinematography which, in this case, documents January the 21st. Is it an allegory of life as a movie? Or is it a tribute paid to a never-ending personal movie which is on every day and remains always relevant?

Monotopies can be considered an intuitive beginning of the afore-described graphite works of the artist. Such a conclusion is arrived at by identifying special segments gaping shaped in analogue gesticulation in the monotopies created using the planographic printing method. The tridimensionality can be also sensed in “The Wanderings”. Painted in acrylic, the searches of the desired shapes/spaces are rendered through direct application of hands on paper.

Abstracted graphite works of the author have a special relation to space. However, it wouldn’t be accurate: while you are trying to get oriented around, there emerge figures on a complicated surface and you start seeing a narrative. Where graphite paintings can be qualified as creating for the mental space, the blue monotopies could be identified as an entryway to that space. (In terms of time, the year 2000 is also a distant section of the today’s corridor – the beginning of a step).

This is the zone of contemplations where Eimutis Markūnas employs the tools of the late 20th century (modernist importance of a shape and post-modernist position of the perception of an artwork) to create a theory with empty gaps for the perceiver to watch the near-world through non-covert holes. These are free passageways. And all those willing are welcome to enter.